Okay. So the above pick shows the new system vs the old system. Instead of going toward the unexis and using a key the nexus auto teleports you to the World Map where you can move around designated pathways. So far I'm very happy with the result. Not only do the picks gives clue about the world, and what's going on it also showcases the insane configuration of mansion. Very Alice in Wonderland.

A: Point pathway. You move along this.
B: Lock. You need those keys for a reason and won't be able to progress past locks without them.
C: Room. Unique icons showing designate rooms
D: new areas. The paper mansion builds new areas when more people come inside as indicated here.
E: Segregated Areas. Not all areas can be easily accessed. The First broken room for example has no point path. You have to get to them the hard way. So basically I'm not abandoning the exploration element at all. Just adding to it.

I'll update shortly with what I have on the regular world map. Cheers 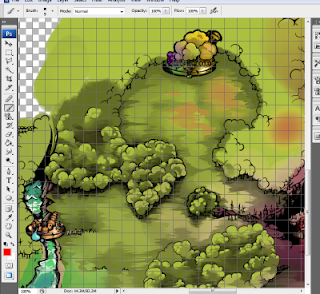 WM. It's resized so it doesn't follow the grid properly on this resolution but it does full size. this is a free roam map. No point to point movement. The major areas show up instantly. Hidden areas will only show up once you sniff them out. Also coming along quite well. On one hand it's been a huge workload incease having to redo everything. On the other hand making new distinct areas is much simpler. So yeah. this has been just awesome

Okay. So right now the world map is big it's empty and it's gross. I was having yet another discussion about what I could do to fix it with Kuga who I like to think of as a a conceptual mob boss because he knows how to take an idea and make it work for him.   Anyway, this coversation came about because of some hand drawn pokemon world maps I found. Those look good. Traveling isn't a bitch. They feel full of life. Slight problem though. They aren't tiled. I'd have to do point to point travel if I made something like.

So we were just sitting there with our tea and pizza bouncing pros and cons off of each other. When he suggests using it for the paper mansion instead, because as many of you have noticed, traveling in that place is a wreak. Good idea. But while I was working on that I kept thinking about ways I could deal with the tiling for a hand drawn overworld map. I came to the conclusion I might be making things harder in my head than they have to be, so I gave that a shot.

So far it's coming along really really well. I don't want to show anything until I get some of it colored. But the results thus far have basically made me giddy all day.
Posted by Regless at 8:07 PM 14 comments:

More news. Another couple maps done. Found another older one that isn't was set aside for... well now expect it kinda suck now. So that'll have to be redone. I've got about three really big ones to go. After that. Eventing and art. been drawing a bit anyway whenever I feel the luls come for me.
Posted by Regless at 2:58 AM 3 comments: